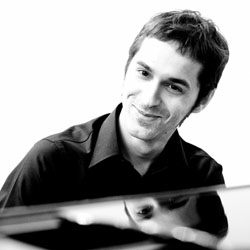 He participated in performances and premieres of composers of the younger generation such as Dariusz Przybylski and Kamil Kosecki. He honed his skills at master courses in the country and abroad with such authorities in the field of music as Arie Vardi, Viera Gornostaeva, Alexiej Orlowiecki, John O'Connor, Kevin Kenner, Vitaly Samoshko.

Piotr Kopczynski was a scholar of the National Children's Fund, the Ministry of Culture and the Arts, and twice winner of "Musical Youth Forum" Austrian Cultural Forum in Warsaw. From 2012, he is a lecturer at the University of Music in Warsaw Frederic Chopin, his alma mater, from which he graduated in 2008 in the class of prof. Peter Paleczny and chamber music in the class of prof. Mai Nosowska.